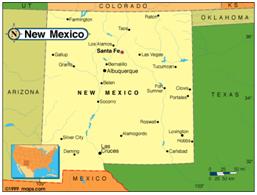 - New Mexico is a state located in the southwestern region of the United states. Inhabited by Native American populations for many centuries, it has also been part of the Imperial Spanish viceroyalty of New Spain, part of Mexico and a U.S. territory. New Mexico has the highest percentage of Hispanics, including descendants of Spanish colonists and recent immigrants from Latin America.

New Mexico has the highest percentage of Keres, Navaho, and Spanish speakers in the United States.
Back to List
Get a Quote >